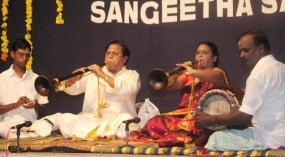 Praying for the Gift of Playing the Nadaswaram;

This is the first time the Cleveland Aradhana has included a full-length nadaswaram concert. The artists, Sheikh Mahboob Subhani and his wife Begum Khaleeshabi Mahaboob say they need at least three hours or more for a concert as it takes time for the wood wind instruments to settle down in these dry and cold climate conditions. And they cannot warm up in the hotel room for fear of disturbing the other guest with the loud instruments.

These are not the usual loud and blaring sounds we hear in the background on festive occasions. The mood created by the talented duo was contemplative throughout. Natakuranji varnam precedes Hamsadwani and Akhilandeshwari in Dwijavanti. Sogasuga Mridanga Thalamu in Sriranjini was accompanied with a soft touch on the tavil.

The Thodi alapana was expansive and in the grand tradition of their Guru; Sheikh Chinna Moulana. They took up the difficult piece Chesinadella Marachitivo O Rama Rama that was executed with a precision not found in many vocal concerts. The nadaswaram seemed to virtually speak the lyrics out aloud.

Many senior artistes were in the audience and enjoying this soul fest. Prof. T.R. Subramaniam, violin maestro T.N. Krishnan, T.M. Krishna, Ramnad Raghavan, Guruvaiur Dorai and several other musicians were all present. During the tani Sri Vembu Muthukumar and Sri Manickam Sankar showed their dexterity and demonstrated that Tavil can also be played softly and produce sounds of exceptional nuance and resonance.

They ended the concert with the ten Bhaja Govindam verses in the ragamalika popularized by M.S. Subbulakshmi. Again one could sense the nadaswarams’ enunciation of the Sanskrit verses of Adi Sankara.

I was struck by the incongruity. Here was a Muslim couple playing Hindu religious music. I also noticed that the box that held the nadaswaram had pictures of Hindu Gods. The couple was also the Asthana Vidwans of the Sringeri Peetam. I was curious to know more about how this husband and wife team was introduced to this music? Did they know the words of the songs they play so soulfully? Do Hindu rituals also enter their lives at home?

We caught up with the artists back stage. The soft spoken, unassuming couple and the equally modest and quiet Tavil duo sat down and spoke with us in a Tamil which was not adulterated with English vocabulary:

Q. Do you remember how you started to learn nadaswaram?

A. I was five or six years old when my father started including me in the lessons he gave other students. By age ten I was playing at concerts with my father. She (he indicates his wife sitting by his side with an affectionate nod) is my own Athai’s daughter. She was taught by her chittappa and by age nine she was also giving concerts.

Q. How were you able to wield such a big instrument when you were so young?

A. We learned on a smaller nadaswaram because our fingers were small at the time. We could not have reached and held the instrument. Within a couple of years we were able to play the full-sized instrument.

Q. You are both Muslims. How did you come to be introduced into this life of playing religious Hindu music?

A. Our families have a story about this (he says with a smile) that is written in our family record book. It may or may not be so, but it is our family history. Eight generations ago one of our grand parents was a young boy in Saathulur, which is in Guntur district. The boy did not do well in his lessons and his father punished him with a beating. This form of punishment was common in those days when they did not know better.

The young boy ran away from home in pain and hid in the nearby Munivandamma temple. That night, the Amman deity of the temple appeared before the boy and comforted him. It is said that the deity wrote a mantra on his tongue and blessed him with the gift of nadaswaram music; not only for his lifetime but also for the next seven generations to come. “The seventh generation ended with my father” Sheikh Mahaboob adds with a coy smile. We are the eighth generation. So we now pray to receive the blessing for the next seven generations. His plain white shirt reflects brightly and there is a warmth in his eyes as he says this.

Q. Do you learn the music as swaras or do you also learn the sahitya?

A. We have to learn the words. Music (he uses the Tamil word paattu) cannot be learned and played by just learning the swaras. We are trained in vocal music and have learned all the pieces we play.

Q. What religious traditions do you observe at home?

A. For us, all religions are one. But at home we observe the Muslim holidays and traditions. Our marriage was a traditional Muslim ceremony. However, my father asked me to tie the thali myself. Normally this is not done as the groom rarely meets the bride before the wedding, the elderly of the house tie the knot. We were the first to set this trend and since then, all the youngsters in our family do this. At that time it was a big thing.

Q. Were you satisfied by your concert today?

A. No (they reply quickly and with feeling). We had a lot of trouble with the dry and cold weather. The Sivali (mouthpiece for the nadaswaram) gets dry and it takes time to settle down.

A. It is the removable mouthpiece of the nadaswaram. It is made from the leaves of the Naanal Thattai bush that grows along the banks of the Cauvery River. The leaves are picked, steamed and dried and then the sivalis are made. If you buy a dozen, only three or four will be usable.

A. Nadaswarams are made from the wood of the Accha Maram tree. This is very hard to find today. Beams from old houses that are being demolished are scavenged to make new instruments. It is a dark wood. The dark color of the nadaswaram is the natural color of the wood itself. All nadaswarams are made in Narsingapettai near Mayavaram where a family of two brothers is continuing their tradition of generations.

Later on in the day we spot the couple enjoying flautist Sikkil Mala Chandrasekhar’s concert.