“Someone told me you are Kalki’s grandson?” It was a question proffered hesitantly. When I turned to look at the woman, all I saw was her kind yet piercing eyes. She was wearing a black purdah but the veil had been moved. When I answered her question she reached with her two hands and held mine in a warm grip. “Because of your grandfather I was taught to read and write,” she said with a smile that defused some of the intensity in her voice. “When I heard you were at this wedding I wanted to meet you.” She looked at me for a minute and, before I could gather my thoughts and find my voice to utter a response, she melted away.

This incident happened some years ago when I was attending a wedding in Chennai. From the brief words she spoke I learned that Kalki Krishnamurthy and Rajaji had visited this lady’s grandfather at his home. Upon seeing the little girl playing, the two of them suggested that she be given an education. Kalki Krishnamurthy then sat with the little girl, on the ground in front of the house, and guided the small hand to trace the vowels of the Tamil alphabet in the sandy ground. 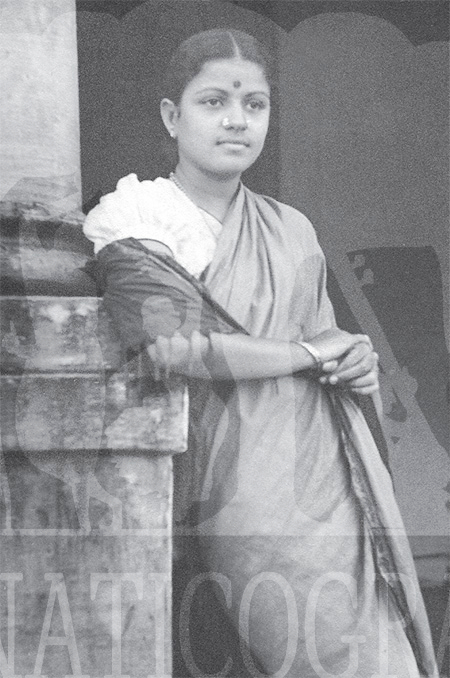 Some fifty years later I had the good fortune to meet her and she was telling me how that moment had changed her life and that of her entire family. This encounter was one of the best gifts I have received and my eyes mist over whenever I remember. I wish I had asked her name and stayed in touch.

Like Kalki Krishnamurthy, MS too had this quality of leaving a deeply personal memory as an indelible mark on everyone she met. Like him, she too had this ability of making people feel they were important to her. Almost everyone who speaks of her today, young and old, speak of a special connection with MS. “I have a very personal connection with M.S. Subbulakshmi,” are the words that begin many an interview about the late musician-philanthropist. I saw this very sentence in an interview in The Hindu recently and it began a train of thought.

Did Kalki inculcate this quality in MS, or did he imbibe it from observing her? We may never know. That they both had this attribute is beyond dispute. I frequently heard this very refrain about Kalki in 1999 during his centenary. The same has been true of MS in this, her centenary year.

Working together and living close to each other, the Kalki and Sadasivam families catapulted each other on to the national stage during the 1940s and very early 50s. Kalki became a household name wherever Tamil was spoken. The weekly grew to have the largest circulation of any magazine in any language in India. MS became a national icon, first as Meera in the movie of that name and then as a celebrated musician.

In this M.S. Subbulakshmi centenary year it is perhaps useful to reflect on her life, her contributions and explore what it is that we all seem to think was the MS magic. Singer, actress, philanthropist, inexplicably an epitome of the traditional south Indian woman and wife, generous, simple, unassuming; these and a multitude of adjectives could be used and none of them do her justice. Language may fail us in trying to understand and portray her complex personality. Perhaps it is not language, which fails us. Rather it may be the inability of our psyches to contemplate the complexity shrouded by her beguiling simplicity. Even her smile would seem to some to hide an unstated sadness. She listened closely to others but seldom voiced strong opinions except to family and very close friends. 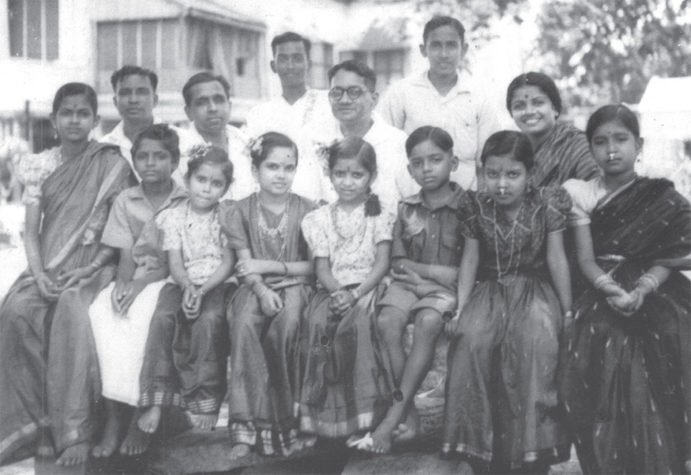 Children of the Kalki family with Kalki Krishnamurthi, Sadasivam and MS

“A riddle wrapped in a mystery inside an enigma.” Winston Churchill used these words to describe the difficulty of forecasting the actions of Russia in a speech in 1939. We could as well use similar words to describe the personality of M.S. Subbulakshmi. We cannot understand how someone could seemingly remain as unaffected by success, recognition, praise and even adoration as she was. We could all see that it was no act or mask that she put on. Few could understand her close relationship with her husband and why she didn’t stand up to him. He was seen as fiercely controlling but it was not easy to recognise the affectionate bond between them. They were both products of tumultuous times and difficult circumstances.

Little in her life came to MS without tension and some controversy. Her birth, as the daughter of Shanmugavadivu, into a devadasi family came during an era of rapid social and political turmoil. The insecurities of that time must have left lifelong scars and a deep seated longing for unconditional acceptance.

Her music was honed through years of unstinting effort and hard work and she continued to learn from other musicians throughout her life. She seemed to instinctively know what others had to be taught and learn to achieve. Her voice culture and her pre-concert routines were exceptionally disciplined. Her accompanists have frequently attested to the meticulous and tireless effort that went into preparing each and every song before it was presented in concert. Even the little children in the family who heard her learn and practice as they played and cavorted about the house had the lyrics and melodies of many of these songs firmly implanted in them for life. There was no denying the reach of her voice, and her music was enjoyed by the great and the humble. Every one of her concerts was an eagerly awaited event attracting sell out crowds. Yet, there were many who would dismiss her as a mere gifted voice. 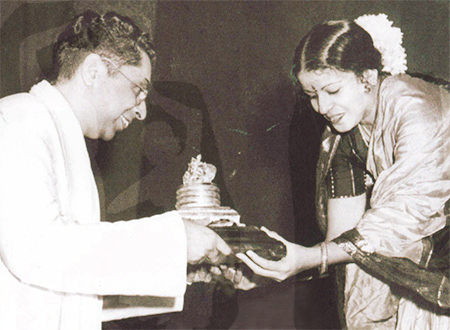 Receiving an award from P.V. Rajamannar, Chief Justice of the Madras High Court

She had no children of her own but her marriage to Sadasivam brought her the responsibility for raising four of them. Opportunities, honours and recognitions suddenly poured in. Her life and her home suddenly became a fishbowl with all of India peering in. Musicians, dancers, prime ministers and presidents, royalty and leading industrialists, scientists and scholars all began to make a beeline to the Sadasivam’s residence. And all of them left enchanted and entranced by her simple sophistication and Sadasivam’s attentive hospitality. She became the first woman to be accorded the coveted Sangita Kalanidhi from the Music Academy and then there was no stopping the awards.

With subsequent releases of recording discs like the Venkateswara Suprabhatam, Bhaja govindam, the Vishnu Sahasranamam and later the Annamacharya collection of songs, Subbulakshmi’s voice became ubiquitous and omnipresent. Today, there is no moment on planet earth when her voice is not heard at a temple or in a home. Pioneering works when they were released, her recordings have redefined these chants and songs permanently in our cultural memory.

In 1974 the Ramon Magsaysay award brought recognition to Sadasivam and MS’s lifelong commitment to helping others through her music. They spent their lives believing in and working toward an India without sectarian strife, an India free of hunger and poverty, an India that respected every faith, an India whose cultural values would be a beacon to the world. They believed in these things and their lives were testament to that belief.

The world over this year, wherever there are a group of emigres from south India, the MS centenary is being celebrated and awards and scholarships are being given in her name.

We are all however faced with the reality that there really was only one MS. No one today can easily capture that energy, that combination of lucid clarity, perfectly aligned pitch, fluid vocal dexterity, stage presence, total involvement and absorption, sadhana, bhakti and that je ne sais quoi that made up an MS concert. Can anyone sing the Bhairavi varnam, Meenakshi memudam, a Pantuvarali alapana, a Begada tanam, Shanmukhapriya pallavi, Pushpalatika kriti, bhajans, devarnama – she made so many of these compositions and certain ragas her own musical property. It is difficult even today for others to attempt these without being compared to MS. 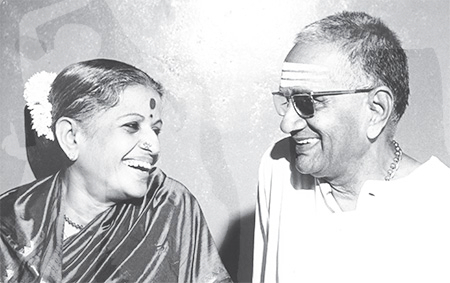 Nor is it easy for any of us to be as self effacing, kind spirited, as willing to share music with royalty, commoners and paupers alike. We have all heard anecdotes about her willingness to sing for other passengers during train journeys and there are those alive amongst us who can bear witness to her kind hearted encouragement of others. She made everyone she met feel special in her presence and gave them a sense of personal recognition. These are not qualities that are easy to emulate, let alone master. The fact is that there was only one M.S. Subbulakshmi. There have been, and there will be, other great musicians and other great philanthropists. However, there can only be one MS and she was, and still is, inimitable.

There is however, one way in which we can all be like M.S. Subbulakshmi. I know that saying that may sound a bit silly. But we really can all be like MS. Each of us could be a philanthropist in our own way. Our smallest attempts to give and help others will have a great impact. Many are already doing this all along. But in this MS centenary year, if each one of us could donate some small amount, an amount commensurate with our ability, to a cause or institution that MS and her husband Sadasivam had supported. Hospitals, colleges, schools, the list of charities they supported were as numerous and varied as the songs she sang.

We can still put up statues and institute awards in her name. However, any function that does not recognise and promote philanthropy would be dearly missing the very obvious. Her approval.