Prelude to the Cleveland Thyagaraja Festival

In the Eye of the Storm; Gomathi in her Kitchen

utwardly, the house looks like any other in the sleepy Cleveland neighborhood. A few more cars parked in front is all the clue one gets that this must be the house of the Cleveland Thyagaraga Academy President Balasubramaniam & Gomathi. As soon as we walk in at 8.30am, we are offered breakfast. Gomathi has started cooking. Today, on the day before, she is busy preparing lunch and dinner for some 35-50 artistes and volunteers who will be arriving through the day. For the next 10 days, meals for all the artistes and the volunteers will be cooked in Gomathi’s kitchen and sent to the Comfort Inn.

For Saturday, she will have the help of some 80 volunteers who will cook and bring the food to be served at breakfast and lunch to all of the attendees. “My volunteers are great” says Gomathi with pride in her voice. “I have a group of old timers but each year we get some new volunteers also. I make out the menu and then share it out. Only thing is that I have to spend a lot of time on the phone calling everybody. A few years’ back Donuts were suggested for breakfast. I felt we should have South Indian food. After all, if it is donuts for breakfast, why not salad and sandwich for lunch?” She asks me. 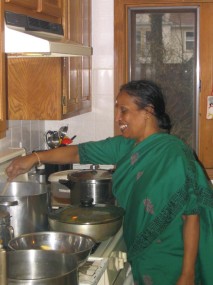 “So I used to make 500 idlis myself. Then they came and helped me because they could see that I was not going to change” she says with a twinkle in her eye. Gomathi is cooking in her kitchen as we speak. Pots and pans filled with cut vegetables and soaking grains surround her. She has three large vessels on the stove. She stands on tiptoe to reach and stir the pot in the back in which she is making what looks like 15 quarts of More Kuzhambhu.

The phone rings incessantly. The printer is calling about the souvenirs. Someone needs driving directions from Pennsylvania. A lady from NYC calls for canceling her package because of illness in the family. I find myself answering the phone so Gomathi can cook without interruption. Husband “Cleveland” Balu is the president of the committee. “We don’t have members and meetings,” he says with a chuckle. “If you are helping, if you are cooking or setting up something you are in the committee.”

Within a couple of hours the house will fill up. There is a strange quiet this morning rather like being in the eye of the storm. Balu recalls an incident from years back when he came home. “There was a man in the house who told me where the food was and he asked me my own name!” he says with a chuckle.

Their house is getting ready for the Aradhana. In one corner sit a wall of cartons containing banana chips for the Saturday lunch. Today, Pepsi is delivering 240 cases of soft drinks; a gift from their CFO Indra Nooyi. Gomathi needs to make sure it goes to the University and not into her living room. In the midst of all this, Gomathi, Sundaram and Balu seem calm and confident. They have done this about 26 times before.

Balu’s daughter gives a message that there are 207 contestants for the children’s competition. They will need four rooms set up in order to get it done in a day. Sundaram says he will go to the University & make sure they have the rooms. Then they get the big call. The Air India flight bringing 29 artists is going to be 4 hours late into Chicago. All the artists will miss the last connecting flight to Cleveland. Coming the next day is not an option as they are to be judges for the Children’s Competition. Sundaram and Balu get on the phone and within a couple of hours they have a plan to bus the group from Chicago to Cleveland. “They will get here at 4am,” he says with a shrug and a smile. “But that cannot be helped”. The competition will have its judges.