Lakshmi Shankar and Gayathri Venkataraghavan in conversation with Shankar Ramachandran 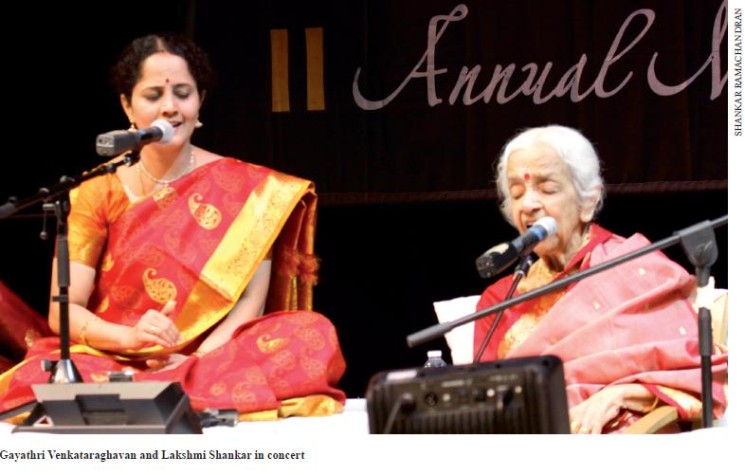 I tentatively sip the coffee and am relieved to find that it tastes familiar. No one has attempted to create a new experience by adding flavours or mixing it with tea. I suddenly feel secure. I am at the San Diego 6th Annual Music and Dance Festival. As I bemusedly read the schedule, I find myself wondering at the novel combinations of artists in many of the programmes. Some invisible hand is at work here.

A veena concert by Geetha Bennett – Nirmala Rajashekar – Neyveli Santhanagopalan, a flute and shehnai quartet, an Amritha Murali-Sankari Krishnan vocal duet — the list of combinations goes on. Very few seem to be performing on their own, Trichur Ramachandran and Ajoy Chakraborty among them. Brothers too have been spared; perhaps because they already have to work with each other.

Lakshmi Shankar and Gayathri Venkataraghavan are to sing together. How would this work, I wondered. When I first heard about this, I spoke with Gayathri to make sure it was not a typo. She seemed as sceptical as I was and sounded tentative. Here she was now at San Diego. Lakshmi Shankar and she graciously agreed to meet me a couple of days ahead of their concert. I was invited to the home of IFAASD secretary Shekar Viswanathan, where they were staying and working on their upcoming concert.

A relaxed, meandering conversation ensued, with Lakshmi Shankar sitting on the couch and Gayathri sitting on the floor next to her. They both switched back and forth between Tamil and English as they spoke about the concert. My questions are in bold and some remarks in italics.

Lakshmi Shankar: We have to decide how it sounds, whether we sing together or one after the other.

Did you teach her Vaishnava janato?

LS: Oh yes, I did. I taught her the way Raviji (Ravi Shankar) taught me for the Gandhi film. My throat is not okay, so I am very nervous and upset.

Are you enjoying the festival?

LS: Absolutely! I am otherwise alone at home all day here, except when my students come. The children go to work. This is a very nice experience for me.

I was very curious about how you and Gayathri were going to do this concert together.

LS: I was curious too! And then when you start off it somehow works out. You don’t hesitate after that. We just have to spend some time ahead and plan it a bit. I want someone to explain khayal and thumri; also the way we sing a raga like Keeravani as it is taken in north Indian music. The way we stop and pause. (She demonstrates: Not Sa RiGa Ma Pa Dha Ni Sa. We never sing it straight like that, but Sa RiGa Ma – RiGa Ma Dha Pa). She sings the swaras with a pause at the madhyama and then a little emphasis on the dhaivata and a long panchama for a finish.

So from the angle we approach it, the raga sounds a little different. Then the thehrav – we stop and pause, and hold. We do that a lot. Did you hear that Keeravani at the concert the other day? From beginning to end there was absolutely no pause even at the panchama. Only brigas. So how can north and south mix? I am not fond of jugalbandi.

Of course there are many singers today who sing so well with gnanam, bhava and involvement, but may not get many concerts. Even now I remember the night concerts of Brinda and Muktha arranged by T.T. Vasu at the Music Academy. Only a small number of gnaanastas (connoisseurs) would attend. I worry about how the next generation will hear and know the music of the great stalwarts. Times are changing so fast.

Faiyaz Khan of the Agra gharana was a rage at one time. But if we listen to him today, we wonder. Audience interests change over time, and I have seen musicians even change their style during their career in response.

Gayathri Venkataraghavan: Do you think their music evolves?

LS: It really depends. Evolve is a difficult word. I personally feel that anybody who sings with involvement and with aatmartham should sound good.

GV: You mean with a spiritual quality?

LS: Yes. That’s it. That was what was special about MS. The way she used her voice. The way she said those words.

(A conversation about the musicians of the present generation ensues).

LS: I hear that a lot of young people are learning music, but I see very few coming up and performing in the classical tradition. You can count them.

So how do we work and build on this? Perhaps audiences are also important?

GV: Yes. It is important the musician does not feel he can get away with something. I hear K.S. Narayanaswamy used to say that he only knew 50 keertanas and felt that he could barely become good by just playing those kritis in his lifetime.

LS: Hindustani musicians learn and specialise in just a few ragas – maybe only fifteen ragas, unlike Carnatic musicians. Today, everyone asks musicians to sing this bandish or that, so they have to keep learning and singing new songs.

GV: When you learn a song like that, you do not have time to work on it.

So Lakshmiji tells me you have planned everything for the concert?

LS: Gayathri, about that tarana – at the end, instead of us singing the muktayi, why don’t we let the mridangam and tabla finish and then you take it up from there? This idea came to me last night. But we must have a full rehearsal.

GV: That would be wonderful. We can practise that when Mannargudi Easwaran and Tanmoy Bose join us tomorrow.

GV. We are still uncertain whether to have a violin.

LS: The violin will just add confusion. If you want, you have a violin for your part. 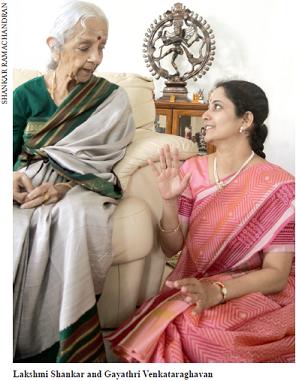 What are you planning for this programme?

GV: Akka will begin with a khayal and we will end with a tarana.

LS: Gayathri will then sing a pallavi in Keeravani.

GV: I am planning a pallavi on Meenakshi. It is in chatusra jati Triputam but the second half will be Khandam. That way it sounds a bit complicated even though it is very simple. MS has sung this pallavi in misra nadai. It goes like this: Maa Madurai valar Meenakshi/ Madhuravani Keeravani amba (She sings the pallavi a couple of times to illustrate.) I sang this at the Academy this year. I wanted it to be typically Carnatic so it would contrast well. Lakshmi Akka will follow with Panditji’s (Ravi Shankar’s) composition. Then I will join her in the tarana, also by him. Then she will sing a bhajan.

LS: It is in Shanmukhapriya, which is alien to Hindustani music.

GV: Will you sing a bit for us now?

LS: My throat is so bad today. (She starts to sing and after a slight rasp the tone is clear). I forget the words also these days. (She stops).

GV: I next render Paramapurusha which blends nicely. (Illustrates by singing the pallavi). Then a bhajan which Akka has tuned in Nand Kedar.

LS: I only taught it to her yesterday. She has learned it so quickly and I am so proud.

GV: We then sing a bhajan.

(Woven through the conversation was part history lesson on the evolution of Hindustani music. Lakshmi Shankar explains and demonstrates nom tom alap and goes on to explain the different aspects of dhrupad).

LS: In vocal music, this style is being followed only by a few like the Gundecha Brothers. But in instrumental music, it is there. Raviji’s music was all dhrupad.

(The topic soon turns to lunch and culinary skills as Usha Viswanathan joins us. We sit down to lunch).

Two days later, I was fortunate to attend this concert. Lakshmi Shankar and Gayathri fill the hall with their voices. They sing together and alternately. The contrasts in Keeravani and Shanmukhapriya play out beautifully. Lakshmi Shankar sets the tone with her khayal. Gayathri responds with a vibrant, ringing tanam that reaches inside every listener.

The concert is both serene and energetic. It is alternately soulful, stirring and nostalgic and evocative. Lakshmi Shankar’s voice is unwavering. Gayathri sings with total involvement in her solo pieces. When accompanying the senior musician, she is attentive and gently supportive.

It was an extremely effective performance both for its thoughtful construction and its skilful execution. The audience is on its feet at the end.